Kiwi 2 is a robot built by Jeremie, based off of Kiwi. He was built for Kadic Academy's annual school robot competition, which consisted of a basketball competition "resulting in him having to use his mouth to grab the ball." He was first shown in "The Robots".

His hull seems to not be very durable, as he was destroyed in an alternate timeline by a single nut in "The Robots". He's typically remote controlled, but can be self operated. He's capable of walking, unlike most mobile robots, which use wheels, including the "Iron Sissi".

While Kiwi 2 was possessed by X.A.N.A. in "Canine Conundrum", his design was different; Kiwi 2 was normally grey with black details, but while he was under X.A.N.A.'s control, he was colored silver, with red details. While possessed, he had the ability to multiply as many times as he wanted, making it difficult for the Lyoko Warriors to reach the Factory. In "The Robots", it was also shown that the robot has the urinary system.

Kiwi seems a little scared of his robot counterpart.

Snapshot of Kiwi 2 making a basket in the competition. 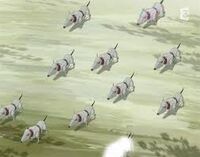 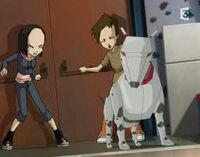 X.A.N.A.-Kiwi 2 gets in despite Yumi and Ulrich's efforts.

Kiwi 2 possessed by X.A.N.A.
Add a photo to this gallery
Retrieved from "https://codelyoko.fandom.com/wiki/Kiwi_2?oldid=142109"
Community content is available under CC-BY-SA unless otherwise noted.