The Katana is Ulrich's one and only weapon while on Lyoko. He had only one throughout the first three seasons, but gains an additional katana in the fourth season thanks to Jeremie's "digital upgrades and modifications."

Like any swordsman, Ulrich fights using a series of stabs and slashes with his katana. Because his weapon has such limited range, Ulrich relies heavily on his Super Sprint ability in combat, which allows him to quickly get within striking range of his target and then retreat. For defense, Ulrich's swords are capable of absorbing standard laser fire or reflecting it back at the monsters and may even block a Megatank's circular laser for a short period of time. Whenever the katana does so, or whenever it is swung or used to combat other weapons like X.A.N.A. William's Zweihänder, it glows blue.

In the first three seasons, Ulrich only has one katana, and carries it in a traditional Japanese saya, or scabbard. In the fourth season, he gains a second sword, which slightly alters his fighting style. Ulrich's updated avatar also includes a small device attached to his upper back with slots into which he may place his swords when not using them.

Like Yumi's fans, Ulrich's katana may be dropped, stolen, or destroyed when damaged, and Ulrich may require new swords to be virtualized to him. Also, like the fans, the sword seems to remain intact even if Ulrich himself is devirtualized, provided he throws it before being hit.

In the episode Franz Hopper, Ulrich's katana was temporarily updated so that it could fire energy slashes to destroy several enemies at once from a distance. This upgrade was given to him by X.A.N.A. where it sent a spectre to impersonate Franz Hopper in order to gain the group's trust and manipulate them into rejecting Jeremie. However, this upgrade is lost later in the episode, nor is it mentioned to Jeremie.

Also, in Nobody in Particular, when Ulrich's mindless avatar got possessed, X.A.N.A. granted his sword the ability to emit a greenish beam of electrical energy to destroy The Heart of Lyoko. However, this ability was lost after Ulrich got reunited in body and spirit.

Ulrich's swords are virtually identical to real-world Japanese katana. The swords have black guards and yellow handles covered with black braided cloth. The blades are metallic grey in color and glow blue when being used for direct combat.

Ulrich with his Katana in Season 1.

Ulrich with his twin Katanas first seen in Double Take.

Deflecting a laser in Season 1.

His sword is thrown right at X.A.N.A. William, defeating him.

The long green-stream of energy from the Katana is fired at the Core.

Possessed Ulrich grips the katana's handle, continuing to fire the beam at the Core.

Ulrich (Possessed), uses his Katana to attack the Core of Lyoko.

Ulrich and his katana become glitched.

Ulrich jumps up and attacks, his sword pointing down.

Ulrich and his clones with their katanas drawn.

Ulrich uses his katana to try and cut the connection to a tower.

Using both katanas to destroy a supercomputer.

Ulrich with his duel katanas in the real world.

X.A.N.A. Aelita with one of Ulrich's swords.

Charging up the Katana in Franz Hopper.

Aelita almost hit by his Katana.

X.A.N.A. William is about to devirtualize Ulrich with his own katana

X.A.N.A. Ulrich attempts to devirtualize Ulrich with his stolen katana...

...but Ulrich manages to get it back from his clone

X.A.N.A. Aelita and Ulrich ready to fight each other

One katana sticking on the ground

Stabbing a Krab with both swords.

Quickly blocking a laser just before it hits his head.

Guarding himself from a monster's attack in the Desert Sector.

Both swords are drawn and ready.

Ulrich gets an idea..

Hiding below with both swords drawn.

Ulrich grips the handles tightly before attacking a Krab. 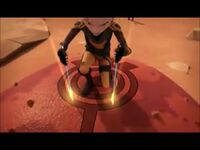 Both weapons hit the target hard and fast! 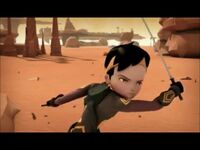 Ulrich readys himself, both swords in hand.

Blocking a monster's attack with both swords in each hand.

Ulrich's dual Katanas glowing blue as he prepares to attack.

Ulrich with his katanas fight X.A.N.A. William in Mutiny.