Jean-Pierre Delmas, known by students as Mr. Delmas, is the headmaster and principal of Kadic Academy. He is very straightforward, but weak-minded and gullible, and is easily bossed around by his daughter Sissi and easily fooled by the Lyoko Warriors.

Mr. Delmas acts as a stern headmaster at Kadic. He believes that his mission is to mold the children into fine adults, and for this reason he is generally very harsh on them. While he is usually strict on the students especially during season 1, he is shown to care deeply about their safety and well-being. In spite of his aforementioned harshness, he tries to present himself as someone students can go to to talk about their problems and issues.

He often makes announcements to the school via the PA system, as most principals of schools do. Notably, when communicating with Kadic's student body, he will uses the term "children" to address them; ex. "Children, have any of you seen William?", "Children, please give me your attention." (Nicole Weber did this as well in Unchartered Territory). While he believes in following the rules to the letter, he does bend the rules at times, for example allowing Ulrich to accompany Odd to the hospital in Killer Music.

In Bad Connection, Jean Pierre claimed that he is an electronics buff, and great at fixing phones, but this has yet to be seen considering that he broke Sissi's phone, although it's quite possible that he is not as good as he says he is as he said that his nickname when he was Sissi's age was "Mr. Circuit Breaker" before correcting himself that it was "Mr. Circuit Fixer", to which he accidentally jammed the screwdriver he was using through Sissi's phone.

In the episodes Ultimatum and Wrong Exposure, Jean-Pierre was possessed by X.A.N.A. twice. However, in both episodes, he was possessed without his daughter being possessed with him. He displayed super strength, shooting electricity out of his hands, immunity to cold temperatures, controling his car with his mind, super speed (even on water), and martial arts.

In Ultimatum, he is possessed to kidnap Odd and Yumi as part of an ultimatum. He knocks William aside when he tries to help them, and eventually his actions are reported to the police. Jean-Pierre takes the two into his car and takes them to a refrigerated warehouse, where he is ordered to keep them alive until the ultimatum times up and he is ordered to kill the two. However, Ulrich manages to track them with Jeremie's bomb that was built to stun a person possessed by X.A.N.A., and the bomb works to his advantage, causing Jean-Pierre to be momentarily stunned before regaining consciousness, where he goes to the Factory and fights Ulrich and Sissi. Here, he shows no hesitation in fighting his own daughter, showing that his will was under X.A.N.A.'s complete control. However, after Aelita deactivates the tower, he is released from X.A.N.A.'s possession and the memories of his kidnapping of Odd and Yumi and Sissi learning the secret of Lyoko are erased with a return to the past.

In Wrong Exposure, he was possessed again to kidnap Aelita and deliver her to the Scyphozoa so it could possess her and make her jump into the Digital Sea. He pulls her out of detention with Jim and orders him to keep the others from leaving (but they defeat Jim using their new skills from commando camp) and virtualizes her to the Forest Sector where the Scyphozoa awaits. He then goes back up, and while Jeremie virtualizes Ulrich and Yumi to the Forest Sector, Odd remains behind to fight Jean-Pierre. However, he ends up twisting his ankle, and before Jean-Pierre could kill him, Aelita deactivates the Tower, freeing Delmas, and triggering a return to the past.

Jean is a French variant of the Hebrew name Yehohanan (יְהוֹחָנָן), meaning "God is gracious". Pierre is a French variant of the Greek given name Petros (Πέτρος), which is also the Greek word for stone. Jean-Pierre was an incredibly popular name in France during the late 40s and early 50s, but is now considered old-fashioned, a reference to Mr. Delmas's prim and proper disposition. Delmas is a variant of the French surname Dumas, which means "son of Martin". The name is a reference to Martin of Tours, a Catholic saint and one of the patron saints of France.

Welcoming parents to the school play.

With Jim and a firefighter in Maiden Voyage.

He's mulling over something. 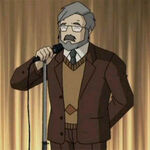 He doesn't seem to happy.

Shown in the factory camera.

Talking with his daughter, Sissi.

Introducing the candidates for being crowned beauty queen.

Mad at Sissi for failing her test.

Nicole Weber shows him how to play his penguin game.

With Jim and Jeremie in Evolution.

Right before a Time Reversion in Exploration.

Listening to Sissi's recording of Jeremie and Aelita.

He grab Odd and Yumi by force.

He confiscates Odd's and Yumi's phone with his electrical power.

Electrocute Odd and Yumi in Ultimatum.

Sliding on the river into the factory.

Under X.A.N.A.'s possession, Mr. Delmas electrocute his own daughter.

You can somewhat see him on the stairs here.

With Jim and Chris Morales in Opening Act.

In front of the students with Jim and Chris.

With Sissi and Jim in X.A.N.A. Awakens.

With Johnny in The Pretender.

Secret agents show up in his office.

In Jeremie's room with the agents.

They have surveillance cameras all over Kadic.

Thinking she is nut, he drag her to the infirmary.

A XANA-possessed Delmas carrying an unconscious Aelita over his shoulder.

In a penguin costume