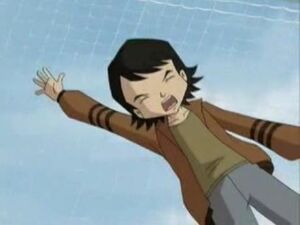 Jean-Baptiste Pujol is character in Code Lyoko. He is in the eighth grade, as of the first two seasons. Dresses in a green flannel with a shirt without buttoning brown long sleeves and blue pants, his hair is black. He can often be seen running from a X.A.N.A. attack.

He could be seen talking to Herb in X.A.N.A. Awakens. He later appears as a goalie for Herb's soccer team in Claustrophobia.

He has a small dialogue in Swarming Attack, then in Uncharted Territory is one of those who bother with Aelita for waiting so long in the service of food and who says he hurries. He participated in the skateboard competition in Final Round, but he does not do it well. He was possessed by XANA in episodes 40 and 91.