Code Lyoko Wiki
Register
Don't have an account?
Sign In
Advertisement
in: Episodes, Season 2, Is Anybody Out There?,
and 2 more
English

Is Anybody Out There?

Is Anybody Out There?

Is Anybody Out There? is the twenty-second episode of Season 2 and the forty-eighth episode of Code Lyoko.

The episode begins with Sissi reading a newspaper and discovering that, when Kadic Academy was built in 1905, a construction worker named Leon Corbet was allegedly buried alive under the foundation of the campus' boiler room. During math class, she gives a note to Ulrich to meet her in the boiler room at midnight.

That evening, Jim reminds the boarding students about the different floors for boys' and girls' rooms and warns them not to trespass on the wrong floor. At half-past eleven, Ulrich sneaks out of his dorm and goes down to the boiler room. There, he is greeted by Sissi and finds Herb and Nicholas sitting in a pentagram surrounded by candles. Sissi reveals her plan is to impress Ulrich with her supposedly psychic abilities by communicating with the ghost of Leon Corbet and putting it to rest. Sissi drags Ulrich with her into the pentagram and starts the "ceremony".

While Herb and Nicholas chant and Sissi attempts to summon the ghost, a spectre appears through electrical wire and enters the boiler, causing Sissi to believe she has actually summoned Corbet. The spectre fuses with the water in the boiler, giving it a monstrous, sludge-like appearance, and re-emerges into the room. Herb and Nicholas run away in fear, but Sissi tries to speak to the spectre, still believing it to be the ghost of Corbet. Ulrich, realizing the danger, grabs Sissi’s hand and escapes with her.

Meanwhile, Herb and Nicholas find Jim, who is patrolling the halls, and tell him about the ghost, but he does not believe them and gives them detention for being out of their dorms at night. Ulrich runs to his room and asks Sissi to go back to hers, but she is too scared to be alone, so Ulrich agrees to leave her in his room with a sleeping Odd while he goes to get Jeremie. Ulrich, convinced the ghost is X.A.N.A.'s doing, wakes Jeremie up and asks him to check the Superscan, but it finds no activated tower.

Suddenly, Jim begins to hear strange noises in the halls of the dormitory building. Something invisible then grabs his leg and pulls him up towards the ceiling, causing him to scream. Sissi, having woken up Odd and explained everything, and also Ulrich and Jeremie, run out to the hall to find their gym teacher floating in midair. Sissi starts to scream and Jim is released, falling to the ground. While helping Jim to his feet, they hear strange noises again and this time Odd is attacked. Jeremie finds a fire extinguisher and sprays the invisible spectre, making it visible to them before escaping. Despite a lack of evidence, Jeremie too is convinced that the ghost was sent by X.A.N.A., and the three boys set off to get Aelita so they can all travel to the Factory.

Ulrich calls Yumi and tells her to head to the Factory while he, Odd, and Jeremie enter Aelita's room and tell her about the X.A.N.A. attack. The ghost reappears in Aelita's room and attempts to strangle Jeremie. Ulrich finds a ruler on the desk and stabs the ghost, causing it to retreat again, and the four of them head to the sewer access in the park. When they reach the Factory, they find Yumi waiting for them. Jeremie then discovers that the Superscan program has been bugged by X.A.N.A., which is why he cannot find the activated tower. Ulrich decides to stay on Earth to defend Jeremie against the ghost while Aelita, Odd, and Yumi are sent to Lyoko.

After being virtualized, Odd begins roaming the four surface Sectors to search for the activated tower while Yumi and Aelita are taken to Sector Five to attempt to debug the Superscan. Back on Earth, the spectre appears in the lab, forcing Jeremie and Ulrich to abandon the supercomputer and escape. Meanwhile, Yumi and Aelita enter the Core Zone and trigger a three-minute countdown. However, the girls find themselves trapped and realize Jeremie is gone and thus is unable to tell them how much time they have. The floor of the Core Zone begins to collapse, stranding Aelita and Yumi on a single pillar in the center of the room. When four Creepers begin climbing the pillar toward them, Aelita uses her Creativity to conjure a floating platform and Yumi uses her Telekinesis to move it, bringing her and Aelita over to the Key on the far wall. Yumi presses the Key but nothing happens. Then they realize that the entrance to the Core Zone starts closing forcing her and Aelita to retreat back into the Arena under heavy laser fire.

In the Factory, Jeremie and Ulrich hide from the ghost in the abandoned control center, where Ulrich electrifies it with a live wire, temporarily stunning it. Meanwhile, Odd, who was unable to find the activated tower in the Desert or Forest Sectors, spots a Tarantula in the Ice Sector and decides to follow it. In Sector Five, Aelita makes it back to the Arena before the walls close, but Yumi is crushed and gets devirtualized, leaving Aelita alone.

Ulrich and Jeremie attempt to return to the lab, but are followed onto the factory floor by the returning ghost, who captures Jeremie. Odd follows the Tarantula through a canyon and finds the activated tower at the very end of it. However, he is overwhelmed when a second Tarantula appears and is devirtualized by it. In the scanner room, Odd finds Yumi, overtired by her especially brutal devirtualization, who warns him that Aelita is alone on Lyoko. The Scyphozoa appears in the Arena and closes in on Aelita while Odd goes up to the lab to try to help her. With her guidance, Odd enters the Scipio code, sending the Transport Orb to rescue her just in time. Odd then tells Aelita where the activated tower is located before leaving to help Ulrich and Jeremie.

Ulrich, who has been attempting to fight the ghost, is quickly overpowered and captured. Odd comes to Ulrich and Jeremie's aid, but is knocked unconscious by the ghost. On Lyoko, the transport orb drops Aelita near the tower and the two Tarantulas, where she manages to run past the monsters and into the tower unscathed. Aelita deactivates the tower, and the ghost disappears. The group then convenes in the Lab, where Jeremie decides to perform a return to the past to fix the broken Superscan program and erase Sissi, Nicholas, Herb, and Jim's memories in the process.

Back in the boiler room, when Sissi tries to summon Corbet’s ghost, Odd hides behind the boiler and pretends to be the voice of the ghost, scaring Sissi, Herb, and Nicholas out of the room. Ulrich and Odd laugh about their prank and leave the room as well. In the empty boiler room, a soft howling is heard before the open boiler hatch closes on its own, implying there really is a ghost. 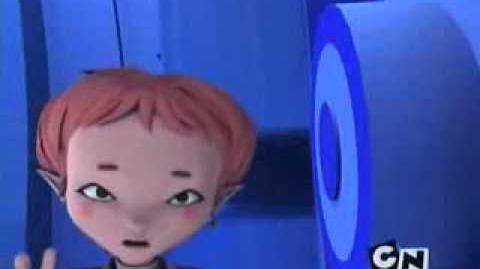