ID Cards are visual representations on the supercomputer display. They allow Jeremie (or whoever is operating the computer) to see who or what is on Lyoko and how many Life Points they have. On the front of the card is a profile picture of the person or thing the card represents, their life points and their attack points. On the back is a symbol that represents the possessor of the card.

When a person is being virtualized, the operator selects the ID card for the corresponding person from a set of five. During the scanning process, the card's colors brighten to show that they are prepared to be sent to Lyoko. When they are devirtualized, the card's colors dull from the top to bottom before vanishing, leaving a grey-colored card. It is believed that while the card stays grey, the person it represents cannot be re-virtualized.

When William was devirtualized in Down to Earth and successfully brought back to the real world after being possessed for several months, the colors of his card returned from bottom to top. When all the colors were restored, the card glowed once and William came out of a scanner.

In Code Lyoko Evolution, ID cards now show if there are any malfunctions in someone's avatar and their code. ID cards also make it easier for someone to know when they can be re-virtualized, as the person's ID picture glows red after devirtualization. 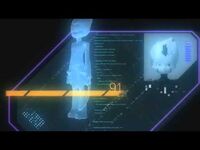 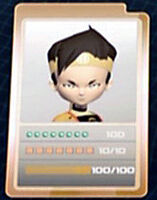 Backside of a monster's ID Card in Season 1 .

All of the Lyoko Warriors (Except Odd) have been devirtualized.

Ulrich and William in the process of Virtualization.

Ulrich's and Yumi's ID cards being red while Aelita's is blue. 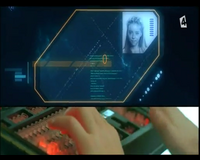 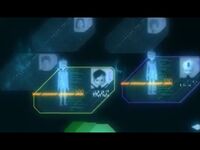 Ulrich and Odd getting virtualized.

William's ID card in the process of being corrupted.

All ID cards are in the middle of Virtualization. 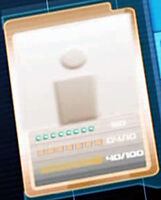