Holiday in the Fog (original title "Vacances dans la brume", litt. "Holidays in the mist") is the third episode of Season 1 of Code Lyoko.

The episode begins at Kadic during nighttime. Ulrich and Jeremie sneak outside and start spray painting on one of the buildings. Meanwhile, Kiwi enters Jim's room and tries to wake him up. He succeeds, and Jim angrily chases him through the building, while Odd, who is hiding around the corner, quietly congratulates Kiwi for waking up Jim. Outside, Ulrich and Jeremie hear Kiwi coming, and Ulrich runs away while Jeremie continues painting. As Jim chases Kiwi past Jeremie, he stops and notices Jeremie's work, which is a portrait of Jim with a big and goofy open mouth and bunny ears, clearly designed to be an insult.

The next day, Yumi, Ulrich, and Odd wait outside Mr. Delmas' office, where he is talking to Jeremie and is obviously disappointed by his behavior. As punishment, Jeremie is given detention for the whole week of vacation, which is exactly what he wanted so that he could stay at school to keep an eye on X.A.N.A.. Sissi and her group are confused because it seemed like Jeremie actually wanted to be punished, so Sissi decides to find out what is going on by tricking her dad into letting her stay at school during vacation so that she can "study."

Outside, Ulrich is complaining about having math tutoring over vacation while Odd and Yumi get to go places. Yumi is concerned about if Jeremie can handle X.A.N.A. alone, but he assures that he'll be fine and that he can work on Aelita's materialization program if X.A.N.A. leaves him alone. Just then, Sissi shows up and says that he won’t be alone because she is staying too. Suddenly, Jim comes up and angrily orders Jeremie to clean up the paint on the wall. Sissi thinks this is funny, but she stops laughing when Jim informs her that her father told him to monitor her studying. Ulrich comments that his math tutoring doesn’t seem so bad when compared with what Jeremie and Sissi will be doing over the vacation.

Later, Jeremie is scrubbing away at the paint while Jim relaxes with a soda and Sissi works on a math problem. She offers to help Jeremie to get rid of Jim for a moment so that she can tease Jeremie and ask him if he did the graffiti himself, or if his "friend X.A.N.A." (whom she overheard him talking about earlier) helped him do it. Meanwhile, X.A.N.A. possesses some barrels filled with dangerous substance in one of the school’s buildings right after Jim leaves with a sponge and brush for Sissi, resulting in a thick, purple gas. Back outside, Sissi is still trying to get Jeremie to talk about X.A.N.A., who she assumes is Jeremie's girlfriend. Jeremie lies that X.A.N.A. is a rock group, and says that Sissi would not have heard about it because of all the "junk" that she listens to. Sissi doesn't like this, but Jeremie just hands her his sponge and decides to take a break, while ordering her around like Jim would. Jim comes up behind him, not flattered at all by the imitation.

That night, Sissi is in her room, complaining to Herb over the phone about how sore she is from doing all that work. He tells her to go to sleep, but she is determined to stay up in case Jeremie tries something that night, and to find out the secret behind Jeremie and his friends. Jeremie is in his room talking to Aelita. He decides to go to the Factory because he needs the supercomputer to make sure that he’s on the right track with the materialization program. Aelita advises him to go to bed, but he wants to go anyway. She thanks him for everything that he is doing for her, and he says that’s okay while blushing.

Jeremie sneaks out of the dorms (past a sleeping Sissi) but he encounters X.A.N.A.'s purple gas in one of the school buildings. He chokes on the gas and continues to cough for several seconds after he shuts the door on the gas. As he is trying to catch his breath, Jim comes up behind him and tells him not to bother with making an excuse as to why he is up, because Jim's heard them all. Jeremie interrupts Jim by telling him about the gas behind the door, but the only thing that is inside the room is a big mess. Jim accuses Jeremie of causing the mess, while Jeremie concludes that X.A.N.A. is behind the gas. Jim puts Jeremie back in his room, where he tells Aelita that they've got problems. She responds by saying that she feels pulsations from X.A.N.A., but she doesn’t know where the activated tower is.

Next morning, the gas starts to travel through the school’s ventilation system. Meanwhile, Jeremie has made it to the factory, where he discovers that the gas is poisonous, and can be deadly. Meanwhile, Jim discovers that Jeremie isn't at school while Sissi wakes up to find her room filled with X.A.N.A.'s gas. She screams, and runs away from the "smoke with arms" and straight into Jim. He doesn't believe her at first, but then he sees the gas and runs away from it with her.

Jeremie locates the activated tower in the Forest Sector, but Aelita is far away from it and will need help. He sends a message to Ulrich, who sneaks out of his tutoring while his tutor is busy. Meanwhile, Odd is at the airport where security is looking at what seems to be a moving skeleton in Odd's bag, which turns out to be Kiwi. Just as Odd is making up a story about how Kiwi was supposed to be with his grandma, Jeremie calls him and asks him to come to the factory. Odd pretends that the call is from his grandma, which confuses Jeremie. Meanwhile, Yumi's car trip hasn't started yet because her mom hasn't finished packing a dress. Jeremie calls, and Yumi slips out of the car. Meanwhile, Jim and Sissi try to escape from the gas in a closet.

On Lyoko, Aelita uses a passage tower to go from the Desert to the Forest Sector. Jeremie tells her to watch out for monsters, then goes back to the school to warn Jim and Sissi about the gas. Jim and Sissi are trapped in the closet with the gas outside and nobody to help them. Sissi starts to panic, while Jim tries to reassure her that Jeremie will be able to help them. She finds the idea ridiculous. Meanwhile, Jeremie arrives at school and starts looking for them, only to be suddenly surrounded by the gas. Ulrich and Yumi arrive and help a coughing and crawling Jeremie get away from the gas. He tells them that Jim and Sissi are inside, so Ulrich decides to go look for them. Yumi tells him to wait, be he has already left. So, she and Jeremie go back to the factory, meeting up with Odd along the way.

Meanwhile, Ulrich is going through the school with a cloth over his face, looking for Jim and Sissi. In the closet, Sissi is admitting to Jim that she only gave up her vacation to find out the secret of Jeremie's gang because she’s wanted to join them for ages, but it seems hopeless to do so. Jim wasn't listening to a word she said, and comments that there is no ventilation in the closet and that they will run out of oxygen soon. Sissi says quietly that she should stop talking then.

Meanwhile, a news report about the toxic smoke is playing at the factory while Jeremie tells Odd and Yumi to help him over to the computer and get to Lyoko. They arrive in the Forest sector, where they meet up with Aelita and some Kankrelats. Back at the school, Ulrich still hasn't found Sissi and Jim. Jeremie tells him to get out of there because he can't take the gas any longer, but he tries one more room first, which turns out to be the closet where Jim and Sissi are running out of air. Ulrich passes out just outside.

On Lyoko, Odd and Yumi are fighting the Kankrelats. They destroy one of them, but they are both hit as well. Back at school, Jim pulls Ulrich into the closet, and is surprised that it’s not Jeremie. Sissi concludes that he came to save her, like she always dreamed he would. Back on Lyoko, two more Kankrelats are destroyed while Odd and Aelita head for the tower, but Yumi is devirtualized.

In the closet, Jim finds Ulrich's phone and Jeremie on the line. He has time to tell Jeremie that they are running out of oxygen before the gas gets into the room and Jim drops the phone. On Lyoko, Odd tries to fight one last Kankrelat while Aelita summons a bridge made of tree trunks across a small pond to the activated tower. The Kankrelat is about to attack Aelita, but Odd gets its attention. Odd and the Kankrelat fire at and devirtualize each other with one shot. Everyone in the closet is unconscious as Aelita makes it to the tower and enters the Lyoko code while Jeremie activates a return to the past.

Ulrich and Jeremie are spray painting again after the return in time. Ulrich doesn't understand why Jeremie still wants to get in trouble a second time even though X.A.N.A. probably won’t try something so soon after a defeat. Jeremie says he won't rest while Aelita remains virtual, and he comments that Jim couldn't be too mad with him after what they painted this time (which is a smiling and noble-looking Jim wearing a golden crown and a robe fit for a king). Ulrich is about to run away as Jim approaches, but he decides to stay behind and get detention with Jeremie in order to avoid math tutoring. 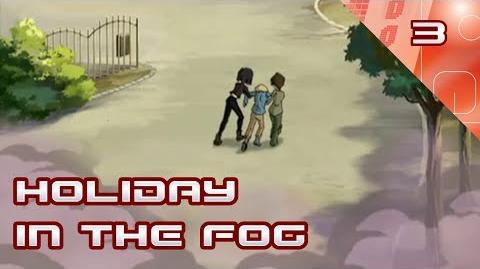