Herb Pichon (also spelled Hervé Pichon) is an eighth-grader (ninth-grader in Season 3 onwards) at Kadic and a classmate to the Lyoko Warriors. He is also best friends with Nicholas Poliakoff. He is the stereotypical nerd, highly intelligent, but has a very sour attitude, also wears glasses and suffers from acne. Herb is also in love with Sissi, although he can't tell her because she is more interested on other boys including Ulrich and Theo.

In The Robots, he participated in Annual Robot Competition. He designed and started with Iron Sissi, a tribute to Sissi but she was repulsed by the robot's appearance. He was losing against Jeremie's Kiwi 2. Didn't want to lose and anger Sissi he used a bolt projectile from Iron Sissi's mouth to destroy Kiwi 2 and win. However, his cheating was filmed by Milly and Tamiya. When X.A.N.A.'s first robots attacked the school he built his own hummingbird robot to help take down one of them. He lost his memory after a Return to the Past occurred. He lost because Jeremie knew what was about to happen and manuvered Kiwi 2 to avoid the bolt.

In Attack of the Zombies, Herb fell to the zombies after William was infected. He also revealed a fear of zombies.

In Lyoko Minus One, he ran for Class Representative on Sissi's request against Jeremie and Odd. It is shown that Herb did not want the position and was doing it because Sissi told him to. Herb did not have any well thought out ideas, nor was he able to connect to the student body, which is what caused him to lose the election. Even Nicholas, his best friend, voted for Odd because Odd had better ideas and was able to connect with every student including those with poorer grades.

In Cousins Once Removed Sissi called him into Jeremie's room so that he could examine his computer. On the computer disk, they found all the information about Aelita's false identity documents and Jeremie's phone conversations using a voice synthesizer, so he downloaded all of it into a CD for the headmaster to get Jeremy and his friends expelled from the school. However, Jeremie's cousin Patrick stopped him and told them that the won't allow any more mending with Jeremie's computer. In that momement, he and Sissi got possessed by X.A.N.A., and Herb began to sabotage all Skidbladnir's data so that the Kalamar could destroy Skid with Aelita inside.

In Music to Soothe the Savage Beast, he and Nicholas asked Aelita for her autograph making her very embarrassed. Then he was scolded by Sissi who then mocked Aelita for making a fool of herself during the concert.

In Bad Connection he along with every other student and teacher was brainwashed by X.A.N.A. and chased Odd around the whole campus. When Odd hid in the cafeteria, Herb and Nicolas found him there and wanted to attack him. Odd knocked out Nicholas with a big cooking pot but when Herb was about to ambush Odd from behind he was knocked out by Sissi who hit him with a frying pan.

In Echoes, Sissi rejected Herb and Nicolas, and dismissed them as dorks, due to her finally getting accepted as a friend by the Lyoko Warriors.

Herb is generally a very sour person, who is competitive and sometimes violent, as well as extremely easy to anger. Herb's anger most likely comes from the fact that the girl of his dreams is rude to him and is usually attracted to another guy. He is incredibly smart in classes and is one of Ms. Hertz's best students. Herb, however, is jealous that Jeremie always outsmarts him in class. Herb also has claustrophobia (phobia against tight and closed rooms), as seen in Claustrophobia. Even though he is in Sissi's gang, it is shown that he is pretty unpopular in the school anyways, mostly because of his snotty attitude and big ego. Herb's face is covered in pimples, and he often complains about it. But on some occasions, his face is drawn without the acne. He is also very easy to scare, just like Sissi and Nicholas as well.

Relationship with other characters

Herb is shown to openly hate the Lyoko Warriors, particularly Ulrich and Jeremie. Herb hates Jeremie due to the fact that he constantly outsmarts him in and out of class, and he hates Ulrich for the simple fact that Sissi loves Ulrich and not him. This infuriates Herb because Ulrich does not return the feelings and constantly talks down to her. Ulrich, for the most part, has little respect for Herb since he seems blind to the fact that Sissi treats him like garbage and the whole team mostly dislike him because of his snotty attitude. The rivalry with Jeremie is one sided, since Jeremie refuses to lower himself to Herb's immature behavior. As was shown when Jeremie offered to shake his hand after he bested Herb in the Robot competition, Herb blatantly and childishly refused.

Herb is best friends with Nicholas, and is most likely the reason that the latter joined Sissi's gang. He and Nicholas usually get along very well. Nicholas and Herb are shown to be great friends and often work well together to complete their goals.

Herb loves Sissi with a dying passion, and is willing to do almost anything for her. Sissi knows this and constantly uses Herb to do whatever she wants. Herb often goes to Sissi for help with solving problems, but she usually yells at him to bother someone else, or ignores him. He spends most of his spare time trying to think of ways to impress Sissi, which usually fail, but his determination rarely falters, which will probably lead either to his complete success, or his downfall. While he is not as brave as Nicholas, Herb is willing to do anything to keep Sissi safe.

Ms. Hertz believes that Herb is one of her best and brightest students. On the flip-side, Jim has been shown to dislike Herb for playing practical jokes on him and because he is, like Jeremie, bad at sports.

Herb seems to suffer from rounds of acne. In several episodes, he has obvious zits, and in other episodes, he doesn't. He has also demonstrated comparable academic performance to Jeremie, typically second to him though.

While Herb has never been on Lyoko, he does have a few skills in the real world.

Herb is a diminutive of the French and English given name Herbert, which is of Germanic origin. Herbert is a compound of the Old Germanic words hari, meaning army, and beraht, meaning bright or white. Hervé, the character's name in the French version of the series, is a given name of Breton origin, derived from Old Breton hoiarn (iron), and viu (brightness). Pichon is a variant of the French surname Pigeon, which is an occupational surname referring to miners, derived from the French word pic, meaning pickax.

Appearances in Other Media

In his sport clothes.

"What's with his eyebrow?"

After losing to Jeremie in The Robots.

In front the class running for election.

Sitting in class with Nicholas.

Turning to stone in Triple Trouble.

Approaching Milly and Tamiya with Sissi and Nicholas.

He must be trying to think.

He plays a guard in the school play.

He and Nicholas were always good friends.

Listening to Sissi's music with Nicholas and Chris Morales.

In the sewer water after falling in it.

Surprised at Aelita's explanations in class.

Sissi blows him off because she's watching Ulrich.

Herb and Sisi possessed by X.A.N.A. 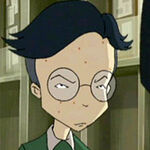