Heidi Klinger is a minor character in eighth grade at Kadic Academy. She is blonde with two strands collected as tails, wears purple flannel with a small flower and light purple pants. In the episode X.A.N.A.'s Kiss and appears to have feelings for Odd, and agrees to go out with him. It is revealed earlier in the episode that the main reason Odd asked her out was that he claimed she was the only girl in the 8th grade that he had not yet dated, except for Sissi and Aelita. She agrees to go out with him, before being kissed by a Polymorphic Clone of Jeremie. Currently, she is another one of many of Odd's ex-girlfriends.

It is revealed in the episode Aelita that Heidi Klinger told the entire school that Odd's feet smell. When Odd confronts her about it, asking if his feet smell a little, she retorts, "A little? Just make sure you and your sneakers don't come within fifty feet of me", envoking laughter from the rest of the group.

Heidi often acts as an extra or background character, and cameos in many episodes. For example, in the episode Wreck Room, Heidi asks the William Clone to open the refrigerator in the Rec Room. To prevent embarrasment due to the clone's dim-wittedness, Yumi offers to open it instead.

She witnessed the electrocution of Nicolas in episode The Lake, warned the rest, but is also electrocuted along with Herb and Mrs. Hertz, she recovers later. Apparently she was possessed by XANA in episode Bad Connection, but only appears on the roof of the building where Odd and Sissi were going to be shot, after the tower was deactivated.

She has made no appearance in Code Lyoko Evolution but was mentioned in False Pretenses by Odd.

Walking away from Jeremy and Aelita.

Asking Jeremy why he kissed her.

The Jeremie clone gets ready to kiss her.

"Jeremie" kisses her in front of Odd.

Stunned as the Jeremie clone runs away.

An error with her pants.

She seems to be confused.

Seen right in front of Yumi. 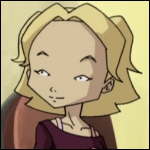