Ghost Channel is the twenty-fourth episode of Season 1 of Code Lyoko.

(The scenes written in italics present the scenes that take place in the Simulation Bubble.)

The episode begins as the Lyoko Warriors are fighting in the Ice Sector. They are trying to get Aelita to a tower after a not-shown attack, and are being attacked by some Bloks. After they defeated them, Odd was doing some dancing as a celebration, completely ignoring Jeremie's warning about another Blok sneaking behind him. He gets attacked by the Blok, but he is able to defeat it easily, while telling Jeremie "Hey Jeremie, next time, just enjoy the show and let the real pros get the job done, okay?" Odd looks at his friends, who give him unimpressed looks, and then realizes what he just said offended his friends, especially Jeremie, who launches a return in time after Odd apologizes and Aelita deactivates the tower.

After returning to the past, at science class, Jeremie notices that Odd, Ulrich, and Yumi aren't in any of their classes, nor are they in their rooms.

Meanwhile, in a place that seems very similar to the science classroom, Odd is apologizing to Jeremie, who seems to be sulking. Odd and Ulrich think that Jeremie is still angry at Odd.

Jeremie, feeling panicked that he has lost his friends (he states that something must have gone wrong during the return trip), asks Aelita if they're still on Lyoko, but she tells him that they're not. To make matters worse, Jim catches him (having snuck into Jeremie's room), and takes him to Mr. Delmas' office. Aelita leaves the tower and starts checking the Desert Sector for Odd, Ulrich, and Yumi, but finds no one. Suddenly, she hears pulsations and deduces that there's an activated tower somewhere and enters the Mountain Sector but just like before she sees neither sign of the activated tower nor the Lyoko Warriors.

Meeting with Odd and Ulrich, Yumi has also noticed Jeremie's weird behavior. Ulrich simply states that he's mad at Odd. Yumi then tells them that something strange happened in her English class. Everything seemed to crackle and the teacher repeated her gestures from a few seconds earlier, like a broken record. She wonders if it has anything to do with X.A.N.A..

In his office, the principal asks Jeremie about the whereabouts of his friends. Jeremie tells him he doesn't know and takes a three-minute break, during which he asks Aelita for help. She tells him that she can hack into the school's computer systems just like X.A.N.A.. Jeremie then takes Mr. Delmas and Jim to the Boiler Room, saying that his friends will be here. Under Aelita's command, the pipes explode, prompting Mr. Delmas and Jim to run out of the room and allowing Jeremie to escape to the Factory.

Upon arriving, Jeremie checks the scanners only to find that all three of them are empty. By this time, Aelita had an idea of what has happened to the others. She shows Jeremie a sound byte that she recorded of a parallel world (according to her, it was some sort of a radio or TV station transmission). She warns him to be careful while watching it, as it is very weird.

In the sound byte, Ulrich and Odd with other students are doing aerobics, stretching, and push-up with Jim in PE Class.

Jeremie is confused, now that he's seeing himself in the sound byte. Aelita tells him it's probably a recording.

Suddenly, Nicholas hits Herb, who then proceeds to yell at and kick his friend. Suddenly, the two fizzle, rewind, and Herb does the same thing again, just like what happened in Yumi's English class earlier. Yumi goes over to Jeremie, who is sitting on the bleachers, immersed with his laptop. She tells him about the weird things going on, and Jeremie informs her he's having difficulty contacting Aelita. She then asks Jeremie why he isn't doing physical education, and he replied that Jim agreed to excuse him. Jim then waves at the two from the track and Yumi sarcastically commends that he is "incredible". She becomes suspicious of him.

Jeremie states it's not a tape since he is in it. He then realizes that X.A.N.A. has captured his friends, trapping them in a world created by X.A.N.A. himself. Jeremie valiantly says he is the only one who rescue his friends. Aelita doesn't agree with it since it's dangerous, but Jeremie, showing his courage, says that he can't leave his friends in the mercy of X.A.N.A.. After all, if the real Jeremie is in the lab talking with Aelita, who is the other Jeremie? Jeremie then says that if he does go into the virtual world, he would much rather do it to find Aelita there waiting for him making her smile.

He is virtualized inside the fake Kadic, which is inside a giant orange bubble that resembles a Guardian. X.A.N.A., in the form of the virtual Jeremie, is at the computer in his room, and notices that Jeremie has arrived (his comments seem to suggest that he had been waiting for him), and dispatches zombie-like versions of Herb, Nicholas and Jim to get him.

Deep in the Ice Sector, Aelita manages to find the Simulation Bubble and deduces that this is where X.A.N.A. has created the ghost channel and decides to head over to it in hopes that it's not too late.

In the meantime, Odd and Ulrich are discussing Jeremie's strange behavior and Yumi's intuition about it, in which Odd comments that any girl who has a crush on Ulrich is not a normal girl. At that time, Yumi calls Ulrich, who panickly says it's getting worse. Her parents keep doing the same thing over and over again and are ignoring her. She decides to go to Factory, without Jeremie (X.A.N.A.) because Yumi doesn't trust him completely. Ulrich and Odd reluctantly agree with her.

The real Jeremie manages to escape the zombies after a long chase and heads for the fake Factory.

In the fake lab, Odd, Yumi, and Ulrich discover that there's no link with Lyoko anymore. Suddenly, X.A.N.A. Jeremie appears, and says that he’s received a message from Aelita that Lyoko is being destroyed and they must get there immediately to deactivate the tower. Yumi, who's been suspicious of him the whole time, doesn't want to do it and holds Odd and Ulrich back. At that time, the real Jeremie arrives in the fake lab. He then explains everything to his friends, including X.A.N.A., that X.A.N.A. only wants to send them into the fake scanners to get rid of them for good. X.A.N.A. Jeremie retorts that the real Jeremie is a clone created by X.A.N.A. to buy time and allow Lyoko to be destroyed. Odd, Ulrich, and Yumi stand between the two Jeremies, indecisive.

X.A.N.A. becomes enraged at this and transforms into a horrific version of Jeremie. He teleports the zombie versions of Jim, Nicholas, and Herb to the fake lab to kill Yumi, Ulrich, and Odd, respectively, whilst he tries to crush Jeremie with cables summoned from the floor.

Arriving in front of the bubble, Aelita uses her Creativity to destroy the bubble, causing it to explode. As the fake world breaks down, Jeremie is ejected from Lyoko and is devirtualized. After returning to the real world, he goes to the Lab to communicate with Aelita. Ulrich, Yumi, and Odd don't remember anything about the ordeal, but Aelita tells them that she and Jeremie did all they could to set them free, much to the group's surprise when they hear that Jeremie actually came to Lyoko for once. They are then disrupted by a large army of Bloks (which acted as people in the Simulation Bubble), whom they happily fight. 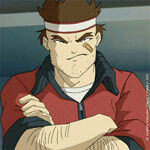