Garage Kids is a short pilot episode made in 2001 that was the original concept of Code Lyoko, which was officially produced in the year 2003.

From the Garage Kids Promotional Documents

A group of kids whose adventures take place in the real world but also in a parallel and virtual world, Xanadu. A boy of about twelve, Odd, arrives one day in his new neighborhood and quickly understands that his three new friends are gifted with extraordinary abilities of their own- Yumi possesses unusually strong telekinetic powers, Ulrich is gifted with the ability of superhuman speed, and Jeremie is extremely smart and highly intelligent; being capable of inventing complex gadgets and machinery from scrap with ease.

These kids have in fact penetrated the secret of Xanadu, the fruit of the labors of a research group whose laboratory, set in an environment inspired by the old Renault automobile factory on the Île Seguin at Boulogne-Billancourt, is now abandoned. Created by the Professor, a learned eccentric who gradually sunk into madness, the virtual world of Xanadu and its multiple disturbances threaten to destroy the real world.

Built on the model of a soap opera which unfolds through the series, Garage Kids offers in each of its 26 episodes of 26 minutes a complete story in which Odd and his friends – Yumi, Ulrich and also Jeremie, a computer wizard – try to end one of the disturbances in the computer network caused by Xanadu's exuberance. While the idea of clandestine natures and hidden identities should seduce the children while feeding their imaginations, Garage Kids rests on the fascination that video games hold for kids today. A confrontation between the real world and Xanadu fully vindicates that of 2D and of 3D. Influenced by the poetry and the visual impact of Japanese animation, the series proposes a graphic universe that's particularly original and strong.

Thomas Romain and Tania Palumbo originally made Les enfants at Gobelins, as the introduction to an animation festival. Based on this, they were hired at Antefilms by Christophe Di Sabatino and Benoît Di Sabatino. From there, they produced Garage Kids as a prototype. Later, this evolved into Code Lyoko's literary and graphic bibles. Thomas Romain left at this time to work on Oban Star Racers.

A promotional artwork of the characters from Les Enfants. 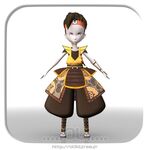 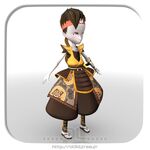 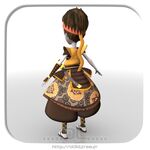 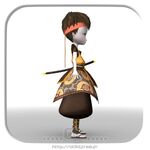 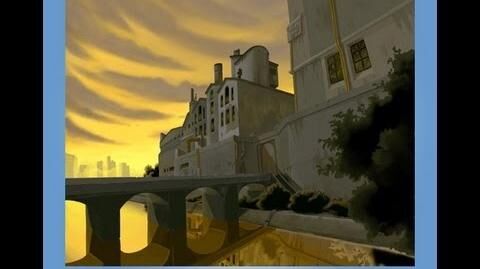