Future Flash was Odd's one and only real superpower in Season 1. It allowed him to see certain events into the future for very short periods. This power would trigger at any time without his knowing, and would last only for a few seconds. He had no control over it and it rarely activated. When it did, Odd usually lost his guard, which made him a vulnerable target for monsters.

In his first sudden vision, he saw Aelita falling into the Digital Sea in the bottomless crater in Desert Sectorin Teddygozilla and it later activated again in Cruel Dilemma to see Yumi falling into the Digital Sea through the bottomless crater in Forest Sector. Odd gets another vision when he and Ulrich are searching for the real Aelita in The Girl of the Dreams; it was revealed that she was trapped inside a Guardian. Sometime after this, Odd uses it to help Aelita find a way out of a labyrinth in the Mountain Sector to the activated tower in Laughing Fit. This was the last time this power was ever shown to be used.

It was eventually revealed in Triple Trouble that Jeremie had deleted this ability when he rebooted the supercomputer and never reprogrammed it since it was, according to him, "useless", likely because the visions that were shown could not be altered, making the ability a liability in both combat and strategic planning.

Odd sees that Yumi is falling into Digital Sea in another vision.

Odd's sudden vision of Aelita trapped in a Guardian. 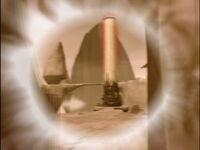 Odd's vision guides him to an activated tower in Laughing Fit.