The Elevator is the transportation that appears in Sector Five. It is used by the heroes to bring them to the place that they want to go.

The main elevator runs around the entire edge of the Core Zone, who wants to access it, must jump at the right time and lands on it. It never stops moving except when it reaches the Celestial Dome or when the security countdown is active, as seen in Exploration, when the Lyoko Warriors reached a platform for the elevator and it never appeared until after Yumi deactivated the key. It stops at the interface panel on the Sector Five surface. The elevator is gyroscopic and has three rails that also have platform surfaces if it ever stops. It also changes directions when the wheels stop and turn.

It also has access to Skidbladnir Hangar, the house of the Skidbladnir. The elevator stops when the Lyoko Warriors want to ride it, and goes through a part of the Core Zone until it arrives at the Skid's Hangar. 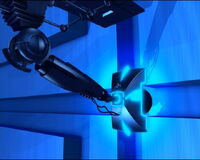 How the Elevator moves. 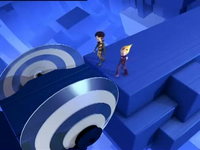 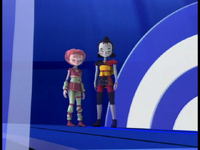 Aelita and Yumi riding the elevator.

About to leave the elevator. 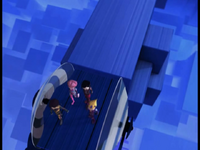 Lyoko Warriors ride up to the Skidbladnir Hangar. 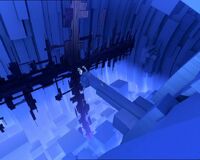 Seen from a far.
Add a photo to this gallery

The Elevator comes to a stop in the Core Zone.

They can't find the transmitter the Ninja placed.

The Elevator in Evolution.

Add a photo to this gallery
Retrieved from "https://codelyoko.fandom.com/wiki/Elevator?oldid=144594"
Community content is available under CC-BY-SA unless otherwise noted.