Double Take is the second episode of Season 4 and the sixty-seventh episode of Code Lyoko.

The episode opens with the Lyoko Warriors in Jeremie's dorm room. Odd is telling some jokes but nobody's laughing and an annoyed Jeremie tells them to quiet down. Jeremie then reveals he has spent over the course of several sleepless nights, recreated the remaining surface sectors of Lyoko and upgraded the others' weaponry, avatars and greatly amplified their abilities. After discussing what to do about William's disappearance, Jeremie uses his voice synthesizer to impersonate William's father and calls the principal, saying William is sick with a fever and will not be coming to school for a while. While the others go to lunch, Jeremie goes to the Factory to do more work.

However, William's real father calls the school a short time later, concerned about not being able to contact his son - however the principal assumes that William's real father is a prankster but due to Nicole Weber's arguments he decides that the administration should start looking for him around campus. Ulrich calls Jeremie to inform him that the school is looking for William and he must attend gym class. Already overworked, Jeremie decides to activate a tower in the newly restored Desert Sector and create a polymorphic clone of himself to attend school while he stays in the Factory.

At school, the gang is at the vending machines when Jeremie's clone arrives dressed for gym class and meets them. Despite having a perfect appearance, the clone has the polar opposite of Jeremie's personality. He is shown to be overly confident in himself and flirts with Yumi. Believing him to be a X.A.N.A. trap, the group is ready to attack when the real Jeremie calls Yumi and notifies them of his clone. Yumi tells him that he should have told them sooner and complains about the fact that the clone is the biggest ladies' man she has ever seen to which he figures that the reason for the clone's different personality is simply an "emerging quality that appeared unexpectedly."

In gym class, Jeremie's clone excels at track and field, much to Jim's amazement. Meanwhile, on Lyoko, William arrives at in front of the crater where Jeremie's tower is located and attempts to take control of it for X.A.N.A.. William and Jeremie fight for control of the tower, causing the Jeremie clone to start behaving erratically. But Jeremie won't make it easy for X.A.N.A., as the former gathers some energy from Sector Five to strengthen the tower's protection and he turns it back under his control. It won't last long, though, as William starts taking control of the tower again.

When Jim tells the clone to go to the infirmary after he attacked Odd and he pushed him away on the track, Ulrich, Odd, and Aelita volunteer to escort him. Ulrich and Aelita call Yumi, and the three of them head over to the Factory while Odd stays at school to handle the clone. Odd lures the clone into a storage closet and traps it inside to prevent other people from witnessing its erratic behavior.

At the Factory, Yumi, Aelita, and Ulrich are sent to Lyoko and get a first look at their new outfits and modified weapons. After heading out, Ulrich faces off with William. Meanwhile, at the school, X.A.N.A. gains full control of the clone, and it escapes from the closet. After assaulting the principal and pushing Odd aside, the clone then sets off for the Factory. Odd calls ahead to warn Jeremie, and he shuts down the Factory's elevator as a precaution.

On Lyoko, when the Overwing is shot down by a Tarantula and Aelita and Yumi are sent falling into the Digital Sea Suddenly a pair of wings sproud from Aelita's shoulder and she wonders what they area. Jeremie tells her that he made them as a little surprise for her. She then uses her new power to save Yumi from falling. Meanwhile, the clone arrives at the Factory and overrides Jeremie's control of the elevator. In response, Jeremie locks the doors leading into the lab.

While Yumi and Aelita battle the Tarantulas, Ulrich is immediately devirtualized by William after using his Triplicate ability. At the Factory, the clone begins prying the lab doors open. Meanwhile, Odd finally arrives and uses emergency ladders to get to Jeremie. Odd and the clone arrive in the lab at the same time, and Odd and Jeremie are thrashed in the subsequent fight.

Aelita manages to enter the tower and deactivate it, saving Jeremie and Odd from the clone. However, William then approaches Yumi, who is still on Lyoko, and attempts to push her into the Digital Sea through a gap in the crater. Yumi calls to Jeremie for help, but Jeremie realizes that the clone damaged the interface in the lab and he cannot manually devirtualize her so Odd tells him to virtualize him instead.

Back on Lyoko, William pushes Yumi off the platform. However, she pulls on his arm as he does so and sends them both falling towards the Digital Sea. Before she falls completely, Jeremie manages to virtualize Odd in time to save Yumi. The two watch as William willingly retreats into the Digital Sea. Jeremie then performs a return to the past to erase Jim and Mr. Delmas' memories and repair the supercomputer.

Back in the lab, the group discusses what to do about William's absence on Earth. It is decided that Jeremie will reactivate the tower and create a polymorphic clone of William to throw off any suspicion for the time being. The clone, though dim-witted, then takes William's place at Kadic Academy. 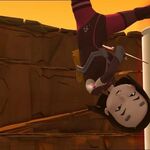 Storyboards of this episode were posted on the StaffCodeLyoko YouTube channel on March 30, 2014. 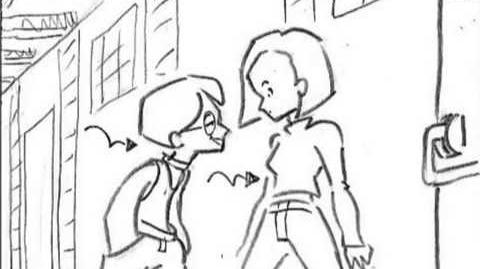