Creativity is Aelita's power on Lyoko. It was first called by name by Jeremie in Rock Bottom?. Soft, angelic, melodic sounds or non-lyrical vocalized singing is summoned and heard; similar to those of a siren. In Evolution, a thin light blue-colored aura appears around her body.

Aelita's creativity was mostly used defensively to protect herself from monsters' lasers like in "Rock Bottom?", but it also helped her lure the monsters like in "Zero Gravity Zone" by creating an illusion of herself. She additionaly used her powers to delay monsters like in "Amnesia" where she created a wall of ice to occupy two Krabs from attacking her and Yumi.

This ability allows her to create bridges, walls, plateaus, blocks, barriers, platforms, ramps, flats, delete structures, and create clones (though she can only create one at a time as seen in "A Bad Turn", mirror images, and illusions).

The episode "Contact" revealed that freshly-constructed platforms made by Aelita have loose pebbles and dirt on them, emphasizing just how detailed her creations can be.

Aelita continues to use this earth-altering ability, even after she developed a "weapon" of her own during the vacation. In Temporary Insanity, she used it to call forth a large wall of solid ice to defend Odd and Ulrich against two Kankrelats and a Tarantula (whom they believed to be Sissi, Herb and Nicholas). In Sabotage, she used it to crush a Tarantula with a big iceberg. Because of the numerous bugs that were in the supercomputer at the time, Aelita's Creativity was also bugged up as the angelic voice wasn't playing properly.

Aelita was also able to use Creativity to free herself from William's Super Smoke in William Returns. Aelita can combine this ability with her Energy Fields, to make a large force field, which she did in Replika and was strong enough to withstand an attack from two Megatanks and William's Zweihänder. In Season 4, Aelita's Creativity was much more stronger as she was able to create a perfect clone of herself which was able to fool William, Digital Sea and Factory Interface in Canine Conundrum. She was able to create one of the floating platforms with mountains to save Yumi and Ulrich from falling into the Digital Sea in Bad Connection.

As a spectre on Earth, her stronger creativity allows her to open sealed doors, and break computer codes in military bases, which she did in Lab Rat.

Aelita continues to use her creativity, but the ability manifests slightly differently than before. Instead of angelic and melodious siren-like singing, a light blue aura appears around her.

This stronger earth-changing ability appeared again in the episode Suspicions, where Aelita used it to open the entrance to the core chamber in the Cortex, which she continued to use for the rest of the season.

This ability appears on the Code Lyoko: Social Game. 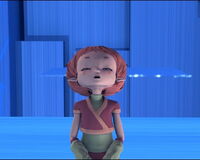 Aelita creating a platform in Sector Five in "Is Anybody Out There?".

Aelita opens the door to the core chamber of the Cortex in "Code Lyoko: Evolution". 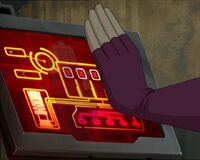 Creativity can even be used to open sealed doors in the real world. 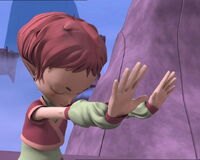 Saving Yumi from a Megatank in False Lead. 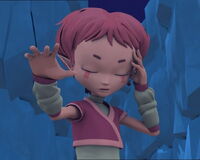 Using it in the Ice Sector. 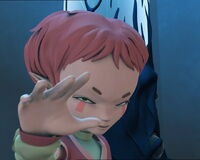 Using creativity to trap the Scyphozoa in an ice cylinder in "Vertigo". 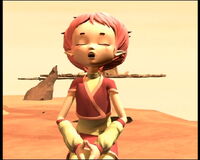 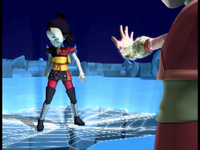 Using Creativity to build a rock bridge in the Desert Sector. 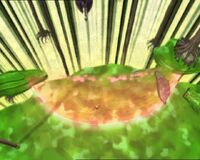 In conjunction with her energy fields, Aelita creates a large energy wall to protect herself, Odd and the Skid in "Replika". 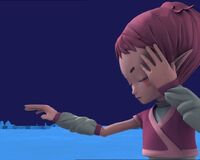 Using Creativity in the Ice Sector.

Aelita creates a makeshift rock shield to remain hidden herself from Hornets in "Rock Bottom?". 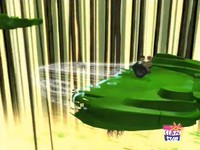 Aelita creating a bridge while on the Overbike with Ulrich in Contact.

Using creativity to shield Yumi from a Blok's laser in "Mister Puck".