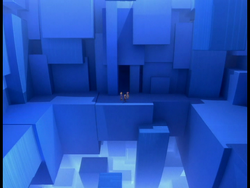 Core Zone is a name for the central passages of Sector Five. After someone has entered Sector Five from the Arena and gone through the corridor leading out of it, they have to wait a few seconds for the Core Zone to open. A countdown then starts counting down from 3 minutes or 1 minute and 30 seconds. That is the amount of time a person will have to find the key and stop the countdown. If they don't make it to the key in time, the Core Zone will be closed and they will be trapped until someone else enters Sector Five and restarts the countdown. If the key is reached in time the Core Zone will open up to where ever the Lyoko warriors are headed to (usually the elevator). The Core Zone is full of dangers and traps. Huge blocks can suddenly smash down on avatars and devirtualize them. Lasers protect some rooms within the Core Zone. Monsters, like Creepers, usually guard the Core Zone, although Mantas have appeared within the Core Zone in the episodes Franz Hopper and The Key. It was thought that the time limit was actually 2 minutes 30, as in Uncharted Territory, the Core Zone started to close when the timer hit 30 seconds.

When Sector Five was recreated at the beginning of Season 4, the Core Zone was a little bit different from before. The old key system had been removed for practical reasons, so now any visitor to Sector Five has direct access to the elevators and the Celestrial Dome. The Core Zone doesn't seem to reconfigure as much as it did before. The Core Zone now also houses the Skidbladnir in a hangar specially programmed for this task. This hangar appears to be darker then the rest of the Core Zone, and can be accessed from either the access elevator or the North Pole in the Celestrial Dome.

The Core Zone Access Hall is a passage way that leads from the Arena to the Core Zone. The hallway always has a different construction which shows that it is a very unique part of Sector Five. Three of its known shapes are the form of a normal passage way accessible via many gates, an open passage way with a lowering stair case, and the last starts like the first but the gates then twist around into a circular corridor. It opens like, as said before a multitude of gates, and if someone does not trigger the Key in time, the gates will start closing, slowly at first to give those time to escape though the rate will quickly pick up. Any virtual entity who dosen't escape the hallway in time will be crushed and devirtualized by the quickly closing gates.

The sector is moving.

The only tower of Sector Five in the Core Zone.

The roof launches down as Yumi and Aelita enter the Core Zone.

Odd tries to reach the key.

Yumi uses her foot to press the key.

Yumi pushes the key in Exploration.

Aelita is trapped in the Core Zone.

A Ninja hiding behind the Skidbladnir.

The Core Zone in Evolution.