Cold Sweat is the twenty-seventh episode of Season 4 and the ninety-second episode of Code Lyoko.

Yumi and Hiroki walk to campus in the morning and Hiroki asks Yumi an unusual question and when they arrive at Kadic, she overhears Milly and Tamiya advertising the latest edition of The Kadic News, the school newspaper. After discovering one of the articles in the paper features a picture of her "secret past", Yumi demands to know who gave them the photo. Based on Tamiya's rather obvious hints, Yumi correctly deduces their source was Odd and goes to find him. In the rec room, Odd receives a call from Milly while playing foosball with Ulrich, and learns that Yumi is coming to confront him.

To save himself, Odd convinces Ulrich to promise to take the fall for the prank, despite not knowing what the prank is. Yumi arrives, and it is revealed that the picture is of Yumi as a child being forced to play dress-up, wearing a frilly pink dress and a blonde wig that made her look like a fairy. When Ulrich, honor-bound, tells Yumi he was the one who gave the photo to the paper, she is shocked and crushed, lashing out at him and storms off. While walking through the courtyard, embarrassed, Yumi meets with Jeremie and Aelita, who inform her that they have localized a new Replika and plan to destroy it that night.

Later, the Skidbladnir arrives at the Replika, which is revealed to be a copy of the Ice Sector, and Aelita moors the ship to a tower. Jeremie then activates the tower, and after two small arguments between Yumi and Ulrich and then Ulrich and Odd, Jeremie translates Yumi and Odd to the supercomputer hosting the Replika. The two then find themselves near a base in the middle of a violent snowstorm, as it is revealed they are at a scientific research outpost somewhere in Siberia.

Yumi and Odd enter the base and begin searching for the supercomputer. Meanwhile, Jeremie detects an activated tower on the Replika, which X.A.N.A. uses to translate William to the base as well. While Ulrich and Aelita disembark from the Skid and travel to the activated tower, X.A.N.A. takes control of the doors in the base and locks Yumi and Odd in a room with William. After a short battle, Odd incapacitates William, and Jeremie manages to bypass X.A.N.A.'s locks, freeing Yumi and Odd and allowing them to continue searching for the supercomputer.

Meanwhile, on the Replika, Aelita and Ulrich are confronted by a Megatank and then two Tarantulas as they approach the tower, and a battle ensues. At the base, William regains consciousness and begins trailing Odd and Yumi, who hide in a room containing brains suspended in yellow liquid while they wait for Aelita to deactivate the tower. After defeating the monsters, Aelita enters the tower just as William finds Yumi and Odd. However, instead of deactivating it, Aelita realizes that the tower is controlling William's teleportation, and thus the interface likely contains useful information on how to break X.A.N.A.'s possession over him. Jeremie calls her a genius and allows her to hack into the tower's data.

As Yumi and Odd struggle against William, Jeremie tells them to wait a tiny bit longer as Aelita is collecting vital data. After Jeremie recieves what he needs, Aelita deactivates the tower, cutting William's teleportation and sending him back to the Replika. Safe, Odd and Yumi resume their search for the base's supercomputer. After Aelita exits the tower, Jeremie tells them it's not over yet as he detects William heading straight towards the Skid. Knowing the latter can still ruin their mission if he enters Code X.A.N.A. in their tower, Aelita and Ulrich rush back on the Overboard to protect it. Yumi and Odd locate the supercomputer while Ulrich and Aelita make it back to the Skid in time and clash with William.

Together, Aelita and Ulrich quickly defeat William, saving the Skid and the translation program. Back on the Replika, Odd and Yumi finally find the supercomputer that has been build on the Russian M13 plans. Jeremie starts researching to discover how to effectively destroy it but suddenly the Superscan alerts him to the existence of hundreds of more Replikas as X.A.N.A. consolidates their energy into the Ice Replika. Suddenly, the ground of the Replika begins to shake as a massive new monster appears behind the ice mountain and walks toward the Skid. Unable to defend against it, Aelita and Ulrich attempt to flee but are devirtualized almost instantly by the giant.

Deciding to abort the mission, Jeremie brings Yumi and Odd back to the Skid, where they each catch a glimpse of the new monster. Jeremie then remotely pilots the Skid out of the Replika just as the monster attacks, and brings the ship back to Lyoko. Later, the Lyoko Warriors convene in the lab, where Odd names the new monster "the Kolossus". Jeremie then reveals that they will never be able to destroy all the Replikas X.A.N.A. has created, and that they must change their strategy.

As the group leaves the Factory, Ulrich demands Odd tell Yumi the truth about the photo, but Odd flees as Yumi asks to speak to Ulrich privately. Yumi tells Ulrich that she has come to the conclusion, based on a comment Odd told her during the mission, that he figured if he posted the photo then she would think about him. She assures him that he does not need to pull pranks to get her attention before kissing him on the forehead before departing for her house. Ulrich, blushing hard, stutters out a good night to her as she walks off. However, as she approaches her front gate, Yumi receives a call from Odd, who had a change of heart and confesses to the photo prank. Yumi angrily hangs up and gets mad at both Odd and Ulrich as the two, meanwhile, head back to Kadic.

The next day, Milly and Tamiya run another edition of The Kadic News, and it is revealed that Yumi has submitted a compromising photograph of Ulrich and Odd "coming out of the shower" together as revenge. Ulrich, now furious with Odd for re-starting the drama with Yumi, angrily chases him through the courtyard as the episode ends. 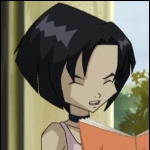