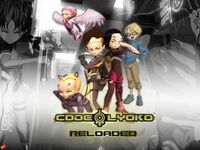 Code Lyoko Reloaded is a project that is announced by Kabillion that was to be released somewhere around 2010. It was not a movie nor the fifth season, as it is not listed in the poster. Code Lyoko RELOADED instead acts like promotional package mainly to focus on consumer products for the Code Lyoko target group. Code Lyoko Reloaded consists of the four novels originally released in Italy by Atlantyca, a Code Lyoko MMORPG developed by CJ Internet, and a new website. A trailer can be found here, "broken link" and a PDF can be found here.

Retrieved from "https://codelyoko.fandom.com/wiki/Code_Lyoko_Reloaded?oldid=99457"
Community content is available under CC-BY-SA unless otherwise noted.