A total of 97 episodes were produced for the show, including the two-part prequel episode. Each episode lasts approximately 22 minutes, or approximately half an hour with commercials. From 2004 to 2007, Code Lyoko aired every day on Cartoon Network's Miguzi block at 5:30 PM EST, with one episode per day, or sometimes two in the cases of season finales.

On May 31, 2011, Moonscoop announced on its Facebook page that the show would be returning for a fifth season, partially due to a large dedicated fan base. The new season was dubbed Code Lyoko Evolution and consisted of 26 new episodes, this time being a mixture of live action and CGI. It premiered online on December 19, 2012 and officially ended on December 19, 2013, with no Season 6 planned as Moonscoop filed for bankruptcy in 2014. 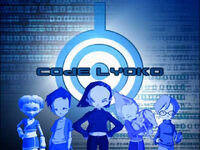 Complete series DVD cover.
Add a photo to this gallery

Retrieved from "https://codelyoko.fandom.com/wiki/Code_Lyoko?oldid=146566"
Community content is available under CC-BY-SA unless otherwise noted.