This article is about the program. For the episode of the same name, see Code: Earth.

Code: Earth, also known as Aelita's Materialization Program, refers to a line of programs mostly created by Jeremie Belpois in Season 1 to bring Aelita to Earth. Like most major programs, this program went through several development stages. Wherever information is available, this article lists them separately.

Jeremie programmed an almost working version in Cruel Dilemma. But it wasn't until he left, and Odd accidentally pressed a few keys that weren't known, which made the program workable. Since nobody knew the full contents of the program, it couldn't be recreated. For an unspecified reason, it wasn't re-usable. Because of these two facts, it was a single-use program. Yumi fell into the Digital Sea later in the episode, and they had to use the program on her instead. This version was the only Materialization program that was able to recover a body from the Digital Sea. Unlike the later versions, it didn't require the target to be in a Tower to work.

In Just in Time, Jeremie managed to create a materialization program which actually worked. Since he was unsure if it would work correctly or not, he tested it by materializing a single hair of hers. This worked, but in the process, his program bugged up Aelita's Annex Program, so that if she used Code: Lyoko, she would be deleted. Exactly that happened, so the group used the hair to restore her and recover her data.

In Code: Earth, another version was created. The episode started with Jeremie having simulated the program several times, with it working. The only issue was that Aelita had to be in Forest Sector's Way Tower to run the program correctly. The program was named "Code: Earth", hence the episode's name. In the end, the Lyoko Warriors successfully brought Aelita to Earth. This was the first shown version that it worked correctly, and was reusable with no side effects.

In Straight to Heart, the program was no longer needed, since Franz Hopper restored Aelita's memories of Earth and her status as a full human. She could now be devirtualized normally when she runs out of life points instead of disappearing forever.

In the French dub, it was called "Code: Terre". 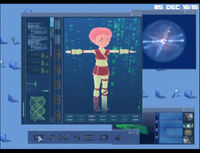 The program being tested…

The program is working! 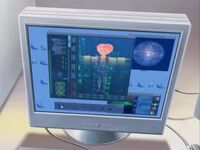 A bad prototype from "Just in Time".
Suomi Српски / srpski
Community content is available under CC-BY-SA unless otherwise noted.
Advertisement