Claustrophobia is the sixteenth episode of Season 1 of Code Lyoko.

The episode starts out with Jeremie talking to Aelita about how humans get tired and need to rest. Meanwhile, Odd and Ulrich play soccer against Herb and Nicholas with Yumi and Sissi watching. When Odd and Ulrich score another goal making the 7-1, Yumi tells them she has to head home. When she leaves a new kid in town named Theo, comes by asking to play since they are losing terribly. Herb immediately takes a disliking to him, because of his clear feelings towards Sissi.

Next, we see Aelita using a way tower to change from the Desert to the Forest Sector because Jeremie needs data on Aelita's Materialization Program. The scene once again switches back to the boys playing soccer. Theo states that they beat Ulrich and Odd 9-7. Herb gets extremely angry and storms off.

At dinner, Theo attempts to sit with Sissi, Herb, and Nicholas, much to Herb's disdain. He yells at Theo about trying to worm his way into their group and claims that he to pass an initiation test. Theo agrees to it and Herb quickly says that he has to scrub the toilets with a toothbrush. Theo waves the suggestion off and remarks how that like a chore they give 10-year-olds at summer camp. Sissi intervenes and instructs Theo to mummify the skeleton in the Science Room, much to Theo's satisfaction.

After dinner, Theo goes to mummify the skeleton, but Herb and Nicholas follow him. Herb, not wanting Theo to stay at the school any longer, wants to rat him out to Jim so he will be expelled. They hear a noise, and it turns out to be Kiwi covered with a pillow sheet. They run away scared as Kiwi returns to Ulrich and Odd before Theo comes and sees them, angry because of what they did.

The next day, X.A.N.A. puts some sort of electrical field around the cafeteria. At lunch, Jeremie leaves because he wants to see Aelita before class and Yumi decides to go with him. Odd and Ulrich are left in the cafeteria just as electrical sockets burst. Alarmed, Ulrich calls Jeremie to see if X.A.N.A. is up to something.

Odd decides to leave but, when he reaches for the door handle he gets electrocuted. After locating the tower, Jeremie goes to the factory while Yumi warns the principal. Jim, Mr. Delmas, and Ms. Hertz go to see for themselves what's going on. Jim tries to get inside, but gets electrocuted as well.

Yumi goes to Lyoko to help Aelita make it to the activated tower. However, they are soon met with a trick from X.A.N.A. There are two separate paths and pulsations lead down both, confusing both girls as to which path is the correct one. Not seeing any other choice, they each take one path.

In the cafeteria, the kids create a makeshift pillar in order to keep the roof from caving in. Herb's claustrophobia kicks in, and he goes for the door. Theo stops and retrains him as Sissi tells him to calm down.

Aelita gets trapped by two Krabs, while Yumi is crawling through a tunnel that connects both paths. Aelita creates a series of log stairs, and stands on the highest one waiting for Yumi. Right as she is about to get shot by both Krabs, Yumi pushes her out the way. The shots hit the opposite Krabs, effectively destroying them both. It appears there is a third Krab, which follows Yumi and Aelita.

Herb begins to feel guilty for being harsh to Theo earlier and apologizes to him for not giving him a real chance. While Yumi faces off with the Krab, Aelita runs off to the tower. As Aelita enters the tower and inserts the code, Yumi destroys the Krab. Jeremie then launches a return to the past.

We come back to the boys playing soccer, and once again Odd and Ulrich score another goal. As Yumi prepares to leave, Ulrich begins to offer to walk her home. However, he is cut off by Theo who offers to do so. Theo thanks Odd for the arrangement, much to Ulrich's dismay. Ulrich stalks off in a huff and Odd follows behind him, insisting it to be better than getting up late to scare Nicholas and Herb with Kiwi, Nicholas kicks the soccer ball as the scene fades.

Yumi with her class books.

Yumi vs a Krab.

Aelita and Yumi in the Forest Sector.

Activated tower in the Forest Sector!

These two are afraid of everything..

..While Sissi gets to know Theo better.

Herb can only dream of such a thing..

Ouch! Odd isn't going to feel too well after that.

The sudden burst from the socket has Odd spooked. 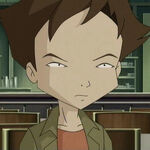 Yumi pushes Aelita out of the way of two laser beams.

A tree tunnel.
Add a photo to this gallery

Retrieved from "https://codelyoko.fandom.com/wiki/Claustrophobia?oldid=146680"
Community content is available under CC-BY-SA unless otherwise noted.