Start a Wiki
Chris Morales is the drummer in the band, the Subdigitals (previously known as the Subsonics), and the nephew of Jim Morales.

Chris made his first appearance in Opening Act when he came to Kadic looking for fresh new talent to use as the Subdigitals' opening act.

Chris was disappointed when he found all the students in the auditions are not talented. He heard Aelita's demo mix, and believed she is the talent he is looking for, but he can't find her. He is dragged into a fight with one of X.A.N.A.'s Polymorphic Spectres (imitating himself), fights besides Jim, and helped the Lyoko Warriors before his memory was erased by a Return to the Past. Jeremie handed him Aelita's mix personally and tells him where to find her.

Chris next appeared in Crash Course, where he judged the finalists with the other members of the Subdigitals.

His last appearance was in Music To Soothe the Savage Beast, where he performed at the concert after the opening act performed by Aelita. After that, no mention is ever made of him or his relation to Jim again. Since Chris and Jim are of a similar age it is likely that Jim's sibling is much older than him.

Chris later appeared in picture form in Code Lyoko Evolution, when Aelita was looking for her mom online.

The spectre counterpart of Chris, X.A.N.A. Chris only appeared once in Opening Act. This spectre didn't even try to be secretive. He didn't bother giving an excuse to Milly or Tamiya, when they saw him carrying Aelita. X.A.N.A. Chris turned into Jim, and fought the real Jim and the real Chris.

X.A.N.A. Chris was disabled by Aelita immediately after she deactivated the tower in the Forest Sector. 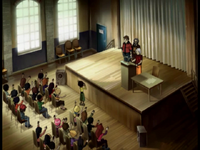 Talking to the students in Opening Act. 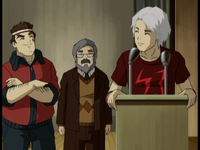 With Jim and Principal Delmas. 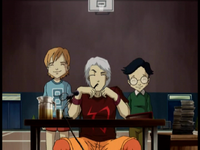 Listening to Sissi's demo with Herb and Nicholas. 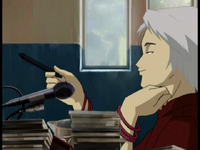 He listens to Kadic's students' demos. 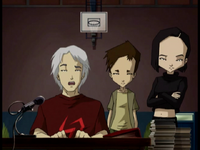 He listens to Odd's demo with Yumi and Ulrich. 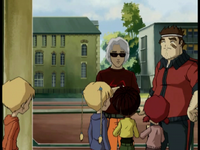 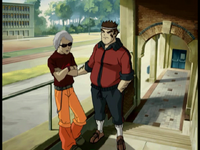 Talking with his uncle Jim. 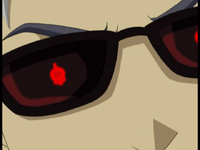 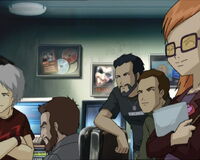 He listens to the finalists of their contest. 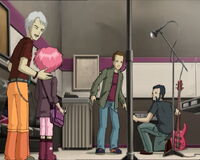 He introduces Aelita to Nico and Ben. 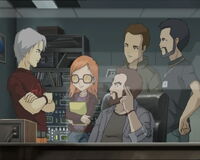 He talks with the 'crew' about who to choose as their opening act. 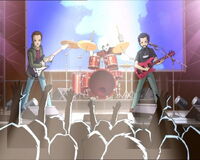 Performing with the rest of the Subdigitals.
Add a photo to this gallery
Retrieved from "https://codelyoko.fandom.com/wiki/Chris_Morales?oldid=146199"
Community content is available under CC-BY-SA unless otherwise noted.