The Celestial Dome is the exit point of Sector Five. It has an interface that gives access to X.A.N.A.'s or Lyoko's data. When a Lyoko Warrior enters, Mantas usually "hatch" out of the outer sphere. While Aelita usually sifted through the data, the others had to deal with the Mantas which would appear until Aelita was done. After that, Jeremie usually programmed their Vehicles, and they went through a tunnel leading to another sector. As of Season 4, the tunnels led out of the craggy outer shell of Sector Five.

After the destruction of Lyoko, the fully recreated Sector Five Interface was not shown again until Fight to the Finish when Aelita used it to launch Jeremie's multi-agent program to exterminate X.A.N.A. once and for all. It later appeared in Virus when Aelita was testing a program on the Core of Lyoko. 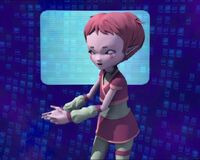 Aelita upset with Jeremie for not letting her search for more data.

She places her hands onto the touch screen…

…and moves data around. 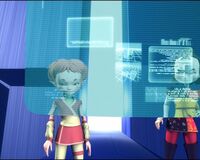 Aelita and Yumi stand in the Dome, with the data screen up. 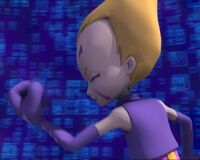 Odd surfs around the Celestial Dome on his Overboard. 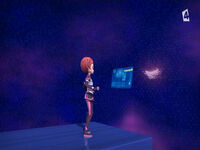 Going through the data, searching for answers…

The Interface in Evolution.
Add a photo to this gallery
Retrieved from "https://codelyoko.fandom.com/wiki/Celestial_Dome?oldid=142534"
Community content is available under CC-BY-SA unless otherwise noted.