Bloks are the most common of X.A.N.A.'s monsters, serving an apparent general-purpose job in X.A.N.A's forces due to their middling attributes. The Blok alone, like most monsters, is not a match for a Lyoko Warrior, beside having only 50 HP (still enough to survive a single Lyoko Warrior attack), their weak spot, the Eye of X.A.N.A., is on all four sides of its main body. This, however, gives them a tactical advantage, in that the Blok can spot anything moving at it from a horizontal plane, preventing sneak attacks unless the Lyoko Warrior gets on top. The Blok is capable of rotating its main body separately from its legs, and can do so extremely fast to lock on to enemies it spots. Bloks are also capable of walking on many inaccessible surfaces like vertical planes as shown in Killer Music. Despite this, Bloks have one weakness: if they are knocked off the ground and land on their side or upside down, they will no longer be able to move.

Bloks have three attacks. The first attack, and by far the most common, is the laser, which while doing fairly low damage (15 attack points) can be fired fairly quickly, unlike the Kankrelat's laser. Their secondary attack is a Freeze Spray which freezes anything that comes into contact with it (even other monsters if they are caught in the crossfire) and Ulrich is the only person to have ever been completely frozen by the freeze ray. The most powerful attack is the Fire Ring, which the Blok seems to only use rarely and does 25 attack points of damage.

Three of the Eyes of X.A.N.A. on the Blok seem to possess the three separate attacks. The last remaining Eye is the Blok's apparent center of control, and their weakness. This fact questions how the Lyoko Warriors know which Eye to hit to destroy the Blok.

In Code Lyoko Evolution, Bloks can form a Blok Wall by stacking on top of each other, forming a 11x11 wall. This makes it difficult for the Lyoko Warriors since their combined Laser does 100AP causing an instant devirtualization and a shockwave that stunts the surviving victim.

The Blok seems to be fairly intelligent, seeing as how it employs tactics in battle. These include popping up from the ground, attempting to cut off Aelita's retreat while alone in the Forest Sector, and using the Freeze Spray to prevent Ulrich's movement in Season 1.

Ulrich stabbing one of its eyes with his katana.

Odd on the Overboard about to fire at three Bloks.

Aelita in the Ice Sector surrounded by three Bloks.

A Blok in the Desert Sector.

Blok charging its laser in the Ice Sector.

Bloks as seen in Season 1.

Season 2 Blok in the Forest Sector.

An army of Bloks in Ghost Channel.

Bloks don't do well with water..

Odd attacks with the Bloks in Marabounta.

Getting ready to fire a beam in the Mountain Sector.

An ice wall is built just before the Blok's beam hits Yumi.

Ulrich using Triangulate on a Blok.

A Blok seen on top of the mountain.

"My LEGO construction got destroyed!"

William Kicks A Blok Off the Cliff.

A Blok toy with two Kankrelats, a fully build Krab and with a Megatank. 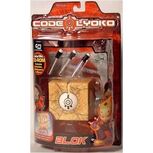 A Blok toy in its box.

Bloks in Get Ready to Virtualize

A Blok in Code Lyoko: Quest for Infinity.