The episode begins at Kadic, where Tamiya is bragging to Milly about her fashion style. She stops talking and they start staring at Ulrich as he walks by with his friends. The two start talking about how great he looks. Sissi, overhearing the conversation, walks up to them and tells them that they are setting their sights too high and adds that they are too young. Milly retorts, asking that just because she's a few years older, and a snob, that he'll come running to her? Sissi, responds, saying every boy in school wants to go out with her, which is a complete lie, of course. Yumi, Odd, and Ulrich walk over and Odd makes a derogatory comment about Sissi, who asks Ulrich when he'll admit his feelings for her. Ulrich tells her that he's just allergic to anyone who's stuck up; i.e. Sissi. Odd tells Milly and Tamiya that Sissi is irresistible to boys, considering the losers she hangs out with. Nicholas gets ready for a fight, but Sissi tells him to back down. Ulrich says Sissi should be a dog trainer with those command skills. Defeated, Sissi retreats. Odd, reminded by the "dog trainer" comment, leaves to feed Kiwi.

While Ulrich follows Odd to their room, Yumi walks into Jeremie's dorm room to find him typing on the computer. He tells Yumi that he's working on a non-natural disaster alarm, which ranks disasters on a scale of 1-10. He adds that he hopes to distribute the alarm to various media outlets, such as websites. He would be automatically notified of a disaster of level 5 or higher, in which case, it could be a X.A.N.A. attack. Yumi then asks Jeremie if he thinks Ulrich likes Sissi. Jeremie asks if she's kidding, noting that she is jealous. In Odd's dorm room, Odd is feeding Kiwi as Ulrich lies down on his bed. Ulrich suggests they pull a prank on Sissi, using Kiwi, catching Odd's attention. Sissi gets a text message on her cell phone which tells her to go to the garden shed. She believes it's from Ulrich.

Meanwhile, there are numerous disruptions throughout France's communications network, from aircraft, to traffic lights, to trains. In a train coordination center, reports come in that train track points aren't working and that two automated freight trains are on a collision course. An employee states that Trains 3611 and 9432 will collide in 26 minutes, and that Train 3611 is carrying toxic chemicals. In his room, Jeremie completes his detection program, and immediately a window pops up on his computer. It is a live news feed in which the reporter says major computer virus has just infected all of France's computer systems, disrupting communications, banking, subways, and air traffic control. The news anchor also states the most dangerous incident is a likely train crash. The news program then switches to field reporter, John Swamp. He reports that one of the trains is carrying toxic chemicals, which would cause an unprecedented environmental disaster, should it get into the atmosphere. The reporter then adds that local authorities are considering a mass-evacuation.

Jeremie tells Yumi to get the others while he gets down to the Factory. Outside, Odd and Ulrich are hiding in the bushes near the Garden Shed as Sissi walks there. The boys' cell phones vibrate; the caller being Yumi. They shut off their cell phones to continue with the prank. Yumi wonders why she can't get through to them. Sissi walks into the Garden Shed, expecting to find Ulrich, but instead, Kiwi runs at her, knocks her down and licks her. Odd and Ulrich step out of the bushes, and laugh at her, playing on the "irresistible" joke. Kiwi walks back to Odd's room alone. Sissi mentions a school rule, which strictly forbids pets on campus. Jeremie runs over to the Factory, where he contacts Aelita. Aelita tells him she will look around Lyoko for an activated tower. Yumi peers into Odd and Ulrich's room, but she doesn't see anyone so she leaves. Moments later, Sissi follows Kiwi back to Odd's room as he goes to sleep in an open drawer. She slams shut the drawer, with the intent of getting back at Odd. Yumi finds Odd and Ulrich sitting on a bench and scolds them. Jim comes to them, holding Odd's dog, and drags Odd to the principal's office for having a pet on campus. Sissi gives a smug look as she walks by them. Yumi and Ulrich are forced to go to the Factory without Odd.

In the lab, Jeremie is watching a news update. The news anchor says the trains are still on a collision course. The city of Paris is in gridlock as traffic jams clog the city's arteries. The police are inundated with calls for help, and looting is rampant as security alarms aren't working. Aelita tells Jeremie that she senses pulsations in the Desert Sector. Yumi and Ulrich arrive at the Factory and prepare for virtualization. Jim leads Odd into the Study Hall, along with his dog. Odd asks if he really has to stay here. Jim says those were the principal's orders and he has to stay here until his parents come and take the dog. Yumi and Ulrich appear in the Desert Sector, near Aelita. Jim is taking a nap when Odd gets a text message: S.O.S. X.A.N.A.. However, he accidentally wakes up Jim and tries to make an excuse to get out, saying Kiwi needs to urinate. Jim doesn't buy it, though, and goes back to sleep. Odd then whispers to Kiwi, asking it if it wants a biscuit. Kiwi starts barking, waking up Jim again. Odd tells Jim that Kiwi really needs to urinate, but Jim says that he will personally take the dog out, while Odd stays put. He then walks out the door with Kiwi. On Lyoko, four Bloks appear out of nowhere and attack the three. Yumi and Aelita run off to the jagged rocks near the activated tower, while Ulrich fights the Bloks. With Triplication, he destroys one Blok, but two of the clones are destroyed right after.

Outside, Jim has Kiwi on a leash, telling it to hurry up as it circles a tree. When the dog doesn't do its thing, he drags it back into the Study Hall. When he opens the door, he finds Odd gone and a window opened. Just then, Kiwi decides to urinate on the floor. Meanwhile, Odd makes his way to the Factory. There, Jeremie tells him that there are 8 minutes left before the trains collide. He then tells Odd to get to Lyoko. In the Desert sector, Ulrich destroys two more Bloks, but the last one devirtualizes him with a freeze ray. The Block then aims at Yumi and Aelita, who start running into the field of jagged rocks. In the Lab, Jeremie virtualizes Odd into Lyoko. The Blok catches up to Yumi and Aelita. Yumi uses her Telekinesis to drop a rock slab on the last Blok, destroying it. Unfortunately, she is devirtualized by a Megatank. Aelita continues to run toward the tower, but the Megatank is keeping up. She calls up her Creativity to generate a fissure, separating her from the monster. The Megatank rolls over the fissure and fires at Aelita. Odd comes in and jumps in the path of the laser, taking the hit. With only 50 life points left, he destroys the Megatank with a Laser Arrow. Aelita deactivates the tower, causing the trains to stop on an overpass, inches from each other. Jeremie then activates a return to the past.

Sissi walks towards the Garden Shed, believing Ulrich is there. When she opens the door, Herb runs at her and jumps on her. Herb pronounces his love for Sissi and tries to kiss her as he is on top of her. At that moment, a camera in the bushes flashes. Sissi tosses Herb aside, who also got a text message telling him to go to the Garden Shed. As Sissi yells at Herb, Yumi, Odd, Jeremie, and Ulrich watch from the bushes. They decide the picture will go to Milly and Tamiya's newspaper. As Herb follows a disgusted Sissi, Yumi says,"That's really such a shame. We've just seen the beginning and the end of a beautiful romance." Everyone laughs, but Yumi and Ulrich stop and look at each other, knowing theirs is just beginning. 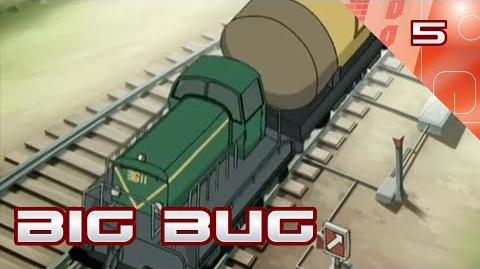 The original episode summary can be found here.