Anthea Hopper-Schaeffer was the wife of Waldo Franz Schaeffer and Aelita's long-lost mother. She is now the wife of Lowel Tyron and lives in Switzerland.

In Aelita's suppressed memories in The Key, she is/was depicted as a pretty young woman with tan skin, green eyes, and waist-length bright pink hair, which Aelita had clearly inherited. However, in Season 5, her hair is shown to be blonde.

Anthea Hopper was a lovely young female scientist who eventually fell for the computer genius and scientist Waldo Franz Schaeffer and later married him. The couple had lived in a cabin on a snowy mountain somewhere in France, where she became pregnant with her only child and daughter, Aelita. Both of them were involved in an enigmatic program known as Project Carthage, which the two seemed to abandon for unknown reasons. As a consequence of this, Anthea was kidnapped by an unknown organization and was never heard from again.

In the final episode, she was first seen in flashbacks of Aelita's long-lost memories of her life on Earth. She had stood side by side with her husband and looked on lovingly as her young daughter made a snowman, and warned her not to go out too far. At Christmas, she watched Aelita open her present of Mister Pück and asked if she liked her elf and hugged her daughter. She was last seen sitting on a white armchair in the living room, but then mysteriously disappeared.

After being kidnapped (as shown in Distant Memory) by the mysterious men in black on Mountain Cabin, Aelita and Franz Hopper had moved to the Hermitage and eventually virtualized themselves onto the virtual world of Lyoko. As for Anthea, she was taken away to an unknown place; presumably Tyron's laboratory in Switzerland, and was never seen or heard from again for years.

Her maiden name is Hopper. Waldo Schaeffer had changed his name to Franz Hopper by taking her maiden name (Hopper) in order to remain hidden from his enemies. The Project Carthage folder also includes a photo of her skiing while pregnant with Aelita. This gives an idea of Project Carthage's length.

In Rendezvous, X.A.N.A's polymorphic spectre had taken on Anthea's form and sent Aelita an e-mail, telling her to meet up with her in the chapel to learn more about her parents. Aelita was so relieved to see her mother again that she suspected nothing at all. "Anthea" gave Aelita a warm, motherly hug and started draining source codes from her. A horrified Jeremie soon appeared and imminently realized that she was hugging a specter. He quickly pulled Aelita away from her and tried to convince her that her mother was a specter, but Aelita refused to believe it and ran back to the spectre and hugged it again, allowing it to drain even more codes. Jeremie tried to save her again, but this time the spectre prevented him from coming closer by attacking with a blast of energy. When the tower is deactivated, the spectre blows up and Aelita thinks that Jeremie did something to her mother, but this time Jeremie manages to convince her that it was not her mother. The specter had acted just like the real Anthea would with her daughter; such as caressing her hair, bringing up childhood memories, and holding her close in a warm, motherly hug.

In Obstinacy, it is shown that the real Anthea is still alive and is working alongside Tyron in his own laboratory, through it's unknown if she's working with him by force or from her own will.

In The Trap, Aelita was in Sector Five and talked with her father about seeing her mother in the Cortex's core, promising that she would do everything she could to find her mother and his wife. In Aelita's room, Anthea was seen in a photograph with her arms around a five-year-old Aelita. Later, Jeremie had returned to see that Aelita had received many replies and that a virtual chain was currently being created to help find her long-lost mother. Jeremie assured Aelita that he was sure they would find her no matter what.

In Espionage, Aelita had opted to stay in the Cortex's core in the hope of communicating with her mother. She later had a nightmare that her mother never wanted to see her again. With Jeremie's aid, Aelita desperately tried to convince Anthea that she is her long-lost daughter and that she is alive. At first, Anthea thought it was a trick, saying that her daughter had died years ago. Aelita then mentioned that her late father had saved her by virtualizing her on Lyoko, where Anthea had realized that she was indeed her long-lost daughter, Aelita. Unfortunately, the conversation was cut off by Tyron before she could react further.

In the cliffhanger, Ultimate Mission, it is revealed that Anthea and Tyron had been legally married for four years, and Tyron went to Kadic to bring Aelita to Switzerland; claiming that Anthea had sent him personally. To coerce Aelita to come with him willingly, he gave her a heart-shaped locket with a picture of Aelita and Anthea (which is later revealed to have a tracking chip inside) and showed Aelita a video of her mother in his tablet, saying that she is happy to know that she is alive and she can trust Tyron, who reveals to Aelita that he only married Anthea to get his hands on Franz Hopper's archives and gave Aelita an ultimatum: to see her mother again or launch a virus in Cortex and never see her mother again. To Tyron's surprise, Aelita chooses to launch the virus but Tyron later shut down his supercomputer, destroying the Cortex and rendering X.A.N.A. dormant once again.

Anthea plays a more direct role in the four novels set in an alternate continuity of the original series. In this continuity, Anthea's kidnapping came about due to the efforts of a man named Mark James Hollenback, who would later take on the name of Hannibal Mago. This was done in an attempt to blackmail and force Waldo to return to a still incomplete Project Carthage. While in Mago's captivity, Anthea was constantly beaten and mistreated, only keeping up hope due to a Sailor's Knot pendant she designed that could serve as an indicator of her family's status. Anthea's memories were eventually erased by Mago due to his acquisition of the Memory-Snatching Glove, a device that had been created to instantly synthesize computer data via brainwaves.

In the present-day, Anthea has been reduced to Hannibal's secretary, now having the rather ironic name of 'Memory'. She accompanies Hannibal to Boulogne Billancourt so that he can obtain Lyoko's supercomputer and gain access to the virtual world's 'Dark Zone', an area of Lyoko that holds all of the functions of Project Carthage's original virtual world, the First City. During this time, she encounters Jeremie Belpois, who is able to deduct that Memory is in fact, Anthea. When Hannibal takes Jeremie into captivity, Anthea is slowly informed of her past and allies herself with the Lyoko Warriors, helping to bring Hannibal and the Green Phoenix down. Anthea is finally reunited with her daughter, and manages to recover the majority of her memories.

Anthea and Waldo happily watching their daughter playing in the snow

Anthea being kidnapped by the Men in Black in Aelita's nightmare

Anthea kidnapped in the back of a van

A spectre of Anthea in Rendezvous.

She sees Aelita as well.

She walks towards the balcony.

The spectre in the chapel.

Aelita believes she is hugging her real mother.

In the dorm halls at Kadic.

Seen on a computer in the background.

Her and Tyron working before noticing someone is watching them. 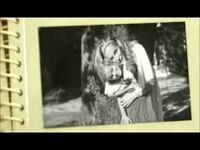 With Little Aelita in a photo.

Tyron ask Anthea who is she talking with.

Anthea realizes that her long-lost daughter is alive.