Anais Fiquet is a student of Kadic Academy, in the ninth grade in seasons 1 and 2. Most of her appearances are cameos, appearing regularly since the second season. She is blonde with a blue bow, wearing a black shirt with a pink waistcoat and a blue skirt. It is revealed by Ulrich in Wrong Exposure that Anais loves little dogs like Kiwi. In the same episode, Odd had the intention to woo her, but accidentally sent the wrong photo to the wrong person. She was zombified in Attack of the Zombies, and was possessed by X.A.N.A. in Lyoko Minus One with the rest of her classmates. 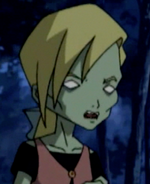 Talking about Yumi's photo with Priscilla.

Anais and Priscilla in the school bus.

Seen behind Yumi in her gym clothes.

Seen standing next to Emily and William's Clone.
Add a photo to this gallery
Retrieved from "https://codelyoko.fandom.com/wiki/Anais_Fiquet?oldid=146983"
Community content is available under CC-BY-SA unless otherwise noted.